“Since its inception on March 30th, Rona has served 2000+ users distributed across different countries, but most of them coming from Kenya. 8000+ messages have been relayed on the platform, which has continuously made Rona very efficient, since as it is with Artificial Intelligence (AI) systems, they get better with usage. To give more value, I have been improving Rona and currently, the bot has a new feature that allows users to perform a 5 Minute self test and know their likelihood of having the virus, based on the symptoms they have” – Brian Ndegwa, Rona Developer.

According to Brian, time had come for Rona. He was growing tired of misinformation which was going round regarding COVID-19 causing a lot of anxiety and panic among people. His friends were also affected by this and that got him thinking of what could be done. He examined the existing solutions; the WHO Bot and the 719 Helpline in Kenya and in his view, these solutions were not as user friendly. In light of this, he decided to build Rona. The chat interface of Rona came about given Brian’s observation that most people love chatting and it would be a great idea if they could get clarification on questions through a friendly chat. To ensure he was coming up with what was really needed as was his aim, Brian shared the first draft design of Rona with some of his friends, lecturers and also the Dean, School of Computer Science and IT at the University, Dr. Kennedy Malanga.  With the useful feedback from these quarters, Brian built the first version of Rona. 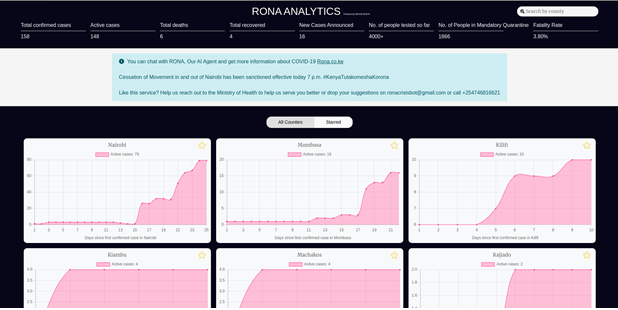 Rona has been evolving over time inspired by the developer’s desire to give more value to users, and particularly Kenyans. At the moment, Rona has an analytics platform that gives visualized statistics per county. Rona Analytics Version 2 therefore has an advanced map feature that displays all the restricted travel zones in Kenya, and some improvements on the graph visualizations. Another great evolvement of Rona is that it now has a feature that allows users to perform a 5 Minute self test and know their likelihood of having the virus, based on the symptoms they have.” Rona is constantly adapting to the challenges that arise with this pandemic and we are dedicated to serving Kenyans, and beyond, to our level best” – says Brian. 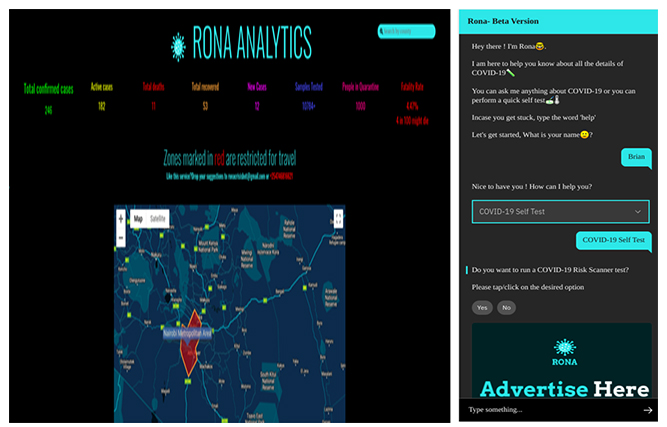 The developer of Rona, Brian Ndegwa, is a 2nd Year student here at Dedan Kimathi University of Technology (DeKUT) pursuing B. Sc in Information Technology. He says that he is inspired a lot by Elon Musk, who has proven to the world repeatedly that with resilience and determination, even what is thought to be impossible, becomes possible. He has worked on various projects so far and he commends the University for offering a very supportive environment and support system to students who step up. He is the IBM Student Ambassador at DeKUT and he believes that for innovation to occur, skill acquisition has to be taken seriously. “I always urge the IBM club members to be patient while learning the skill and mastering it. Then and only then, will they have the power to bring their ideas to reality” – he adds.

For those wondering what the lifespan of Rona is or what will happen to it after the Corona Virus Pandemic is over, the developer has already thought this through. According to Brian, Rona has the potential to evolve into a Social Enterprise that provides Risk Assessment tools for tracking various diseases.