DEDAN KIMATHI UNIVERSITY OF TECHNOLOGY (DeKUT) STUDENTS IN THE MIDST OF THE FOURTH INDUSTRIAL REVOLUTION: FROM DIGITAL TWIN TO DIGITAL TRIPLET

In the fourth industrial revolution, the cyber physical systems have begun to change the way various systems work. To support engineers’ activities, a more developed extension of digital twin, known as digital triplet is slowly emerging and gaining popularity in modern world. But what is digital triplet? What does it entail? To answer this question, a group of fifth year students, who are also in Siemens Mechatronic Systems Certification Program (SMSCP) Level III, developed a digital triplet for the Analytical Process Control Module. The Digital Triplet of this module consists of intelligent systems that interact with both physical and virtual systems for monitoring and controlling of activities in real time. 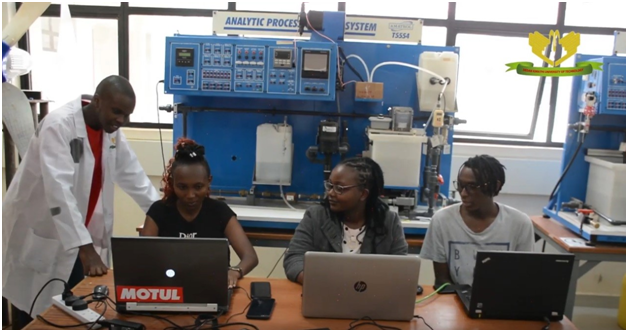 The Digital triplet of the Analytical Process Control module is equipped with facial recognition security which is programmed to allow only authorized individuals to control the module. The program uses an algorithm that writes and saves images of the individuals who have accessed the machine and the time of access; this is an important security feature since in case of a machine breakdown, it will be easy to know who was responsible for the fault that occurred. Another intelligent feature of this project is the ability of the system to recognize voice commands. It doesn’t stop there; the system is designed in a way that after it has recognized the face of an individual with access rights, it greets the individual by name and requests for instructions from the authorized user. An authorized individual can command the machine to start, stop, and determineset point of the controller and so on. In case an unknown or rather unauthorized individual wants to have access to the machine, the individual will be denied access by this system.

When an authorized user is, for instance, bored and would like to have a chat with the machine, an Artificial Intelligent (AI) Chatbot incorporated in the system will aid the user to interact freely with the machine. The chatbot model was achieved by using deep learning to train it with possible words a user might say and possible responses. To crown it all, the system uses a Human Machine Interface (HMI) for monitoring and control of operations. The introduction of HMI in the system is to enable authorized users interact with the system in case of emergencies or faults that might occur with the facial recognition and speech recognition of voice commands.

The fourth industrial revolution demands more than just skills, it demands the openness of one’s mind to receive, synthesize and make meaningful choices in the ever-changing world. The DeKUT Siemens Mechatronics System Certification Program (SMSCP) not only offers opportunities for embracing Industry 4.0 but also serves as a pathway to the technological dynamic world.

DeKUT takes the Digital Twin Technology to the Industry

A DeKUT Alumna wins a 3.6M Grant in the MbeleNaBiz Business Plan Competition