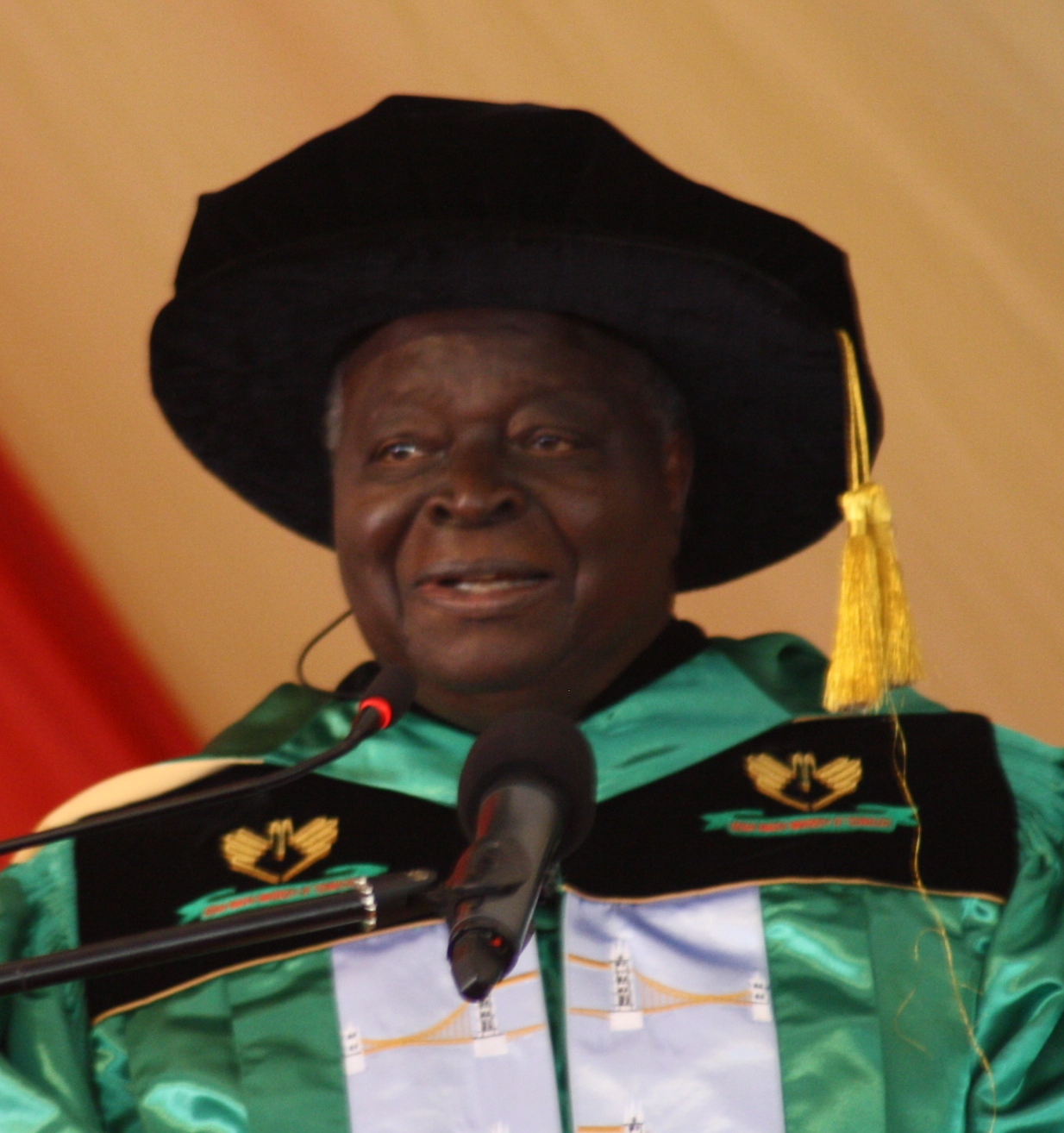 His Excellency Mwai Kibaki was bornin Othaya, Kenya in 1931. He began his early schooling at Gatuyaini, after which he proceeded to Nyeri High School and finally to Mang’u High School wherehe studied between 1947 and 1950. He passed his "O" level examination with a best possible score of six points. From the influence of the veterans of World War I and II in his village, he considered becoming a soldier while in his final year in Mang’u.

However he decided against joining the military and, on completion of his high school education, he proceeded to Makerere University to pursue a Bachelor of Arts degree in Economics, History and Political Science. While at the University, he was the Chairman of the Kenya Students Association and the Vice-Chairman of Makerere Students Guild. He graduated in 1955 with a First Class Honours Degree in Economics and took up an appointment as an Assistant Sales Manager for the Shell Company of East Africa, Uganda Division.

Shortly thereafter, he was offered a scholarship to study in a university of his choice in Britain. He chose to join the world-renown London School of Economics for a Bachelor of Science degree in Public Finance, from where he graduated with a distinction. Soon after, he went back to Makerere University in 1958 where he taught as an Assistant Lecturer in the Department of Economics until 1960.

In December 1960, he left his stable and prestigious job at Makerere University to join the Kenya African National Union (KANU) as the Executive Officer. In 1963 he was elected to Parliament. In his wide ranging political career, he served as a Cabinet Minister in the ministries of Finance and Economic Planning, Health and Commerce and also as Vice President from 1978 to 1988. He also served as Leader of the Official Opposition in Parliament between 1997 and 2002.

In December 2002, he was elected the Third President of the Republic of Kenya, a position he held until April 2013 when he oversaw a peaceful transition of power to his successor, His Excellency Uhuru Kenyatta.
He is married to Mrs. Lucy Muthoni Kibaki and together they have four children and six grandchildren.
The public career of His Excellency Mwai Kibaki spans over fifty years. During this time, he has dedicated his energies and talents to the transformation of the society and the improvement of the welfare of the lives of Kenyans. His is a life that demonstrates active commitment to the achievement of the very noble ideal of bringing about significant positive change to human kind. It is the transformative effect of his leadership to the Kenyan society, the region and the world at large that deserves recognition and honour.

His Excellency’s belief in empowering the society is well exemplified in his transformation of the education sectorin the Country during his term in office as President. Through his Government’s policy on Free Primary Education, millions of children found a place in classrooms across the country raising total enrolment from 6.1 million in 2002 to 8.6 million by 2013. The policy on Free Day Secondary Education followed thereafter, after raising transition rates from basic education to high schoolfrom 47% to the current 74%. The higher education sector was expanded considerably resulting into the current 22 national public universities and 16 private universities, all which saw enrolment at universities rise from 75,000 in 2002 to the current 251,554 students.

This University is itself, a good testament to His Excellency Mwai Kibaki’s commitment to expanding education opportunities to all. The Institution is the culmination of his vision, together with other leaders, who, way back in the 1974 decided to establish atechnical institution that would impart important skills to young Kenyans toenable them find employment or set up businesses. These vision carriers hopedthat one day, the institution they were establishing would develop into a worldclass university of technology with impact on national, regional and international development. The granting of Charter and establishment of this University is an important leap towards the attainment of this noble goal.
In naming the University after the celebrated independence struggle hero, Field Marshall Dedan Kimathi Wachiuri, His Excellency not only immortalized this national hero but also linked this institution with the spirit of the independence struggle in which the Kenyan people sought to be masters of theirown destiny. It was also a poignant reminder to us all that the fruits of liberty that we enjoy today are the result of the sacrifices made by those who came before us and a call to remember the debt we owe future generations through our actions today.

Throughout his public career, His Excellency Mwai Kibaki has endeavored to create national and institutional frameworks which would fundamentally transform and improve the basic welfare ofthe people of Kenya. In his early years of service in the Cabinet, he is knownto have made significant efforts, together with the late Tom Mboya, in guidingthe formulation of the first blue print for the development of our country: The Sessional Paper No. 10 on African Socialism of 1965. This Paper contributed immeasurably to attainment of a consensus on the economic development model adopted by the young independent nation, at a critical time when there were competing ideologies on national development.
In his development endevours, His Excellency has placed great value to detailed planning and formulation of properly thought out public policies with a view that they are strictly implemented so as to bring common good to our people.This meticulous planning and implementation was exemplified through the development of the Economic Recovery Strategy for Wealth and Employment Creation which the NARC Government, in 2003, formulated to guide its economic revival efforts.

Following the success of the Economic Recovery Strategy for Wealth and Employment Creation, the Kenya Vision 2030 was formulated. This is the blue-print to create a globally competitiveand prosperous nation with a high quality of life by 2030, and that aims to transform Kenya into a newly industrializing, middle-income country providing a high quality of life to all its citizens by 2030 in a clean and secure environment. Under his leadership the country saw the implementation ofthe first five years of the Vision 2030 blueprint. This includes the numerous infrastructure development projects, and the constitutional, legal, judicial, institutional transformation envisaged and planned for under the economic, political and social pillars on which the Vision stands.

Change of the Constitutional and Political Environment

Under His Excellency’s leadership ofthe Grand Coalition Government, Kenyans were able to realize a new constitution, and participate in this process as individual citizens through their contributions of ideas and by taking part and passing the constitution ina national referendum. Kenyans now have a constitution they are proud to defend, which is also considered to be one of the most progressive in the world.
Following the promulgation of the Constitution on 27th August 2010, His Excellency’s Government over saw the enactment of 127 pieces of legislation to give effect to the Constitution. Hall marks of this new constitutional dispensation include a more accountable governance system, an independent judiciary, which has been empowered to provide better services to the people,and devolution of power to the Counties that gives Kenyans greater say in public affairs.

In this regard, the case of Somalia stands out. Kenya has been involved in pains taking peace building efforts in that country and recently sent her military there to contribute to therestoration of restore peace and stability. This single decision radicallychanged the course of events in Somalia. The people of Somalia now experiencepeace they have not known for over two decades. Furthermore a broadly acceptedand promising political and governing system has emerged.
His Excellency was also passionate about the resolution of the conflict in Sudan. These peace efforts culminated in the signing of the Comprehensive Peace Agreement and in the birth of the world’s youngest nation, South Sudan. His Excellency’s Government played a critical role throughout this process including supporting in many ways the creation of key institutions in South Sudan following their independence.

We are proud to be associated with this great and important leader whose ability to do that which is right andjust to the people is well expounded in his performance as a public servant. The award of this HONORARY DOCTORATE DEGREE IN HUMANE LETTERS (Litterarumhumanorum doctor) Honoris Causa, is to be awarded in recognition of his contributions to this University, and to the people of Kenya, East Africa and the continent of Africa, now and in posterity.

It is, therefore, with great pleasure, Mr. Chancellor that I present Mwai Kibaki to receive the degree of Doctor in humane letters (litterarum humanorum doctor) Honoris Causa.