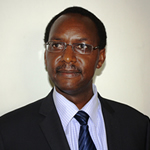 Prof. P. Ndirangu Kioni is serving as the first Vice-Chancellor of Dedan Kimathi University of Technology (DeKUT) following its upgrading to a fully fledged university by award of Charter on 14th December 2012.  He was at Cambridge University, England, where he got a Doctor of Philosophy degree, in 1994. He took his undergraduate studies at the University of Nairobi (UoN), where he obtained First Class honours, Bachelor of Science degree in Mechanical Engineering in 1988, along the way winning the General Motors Prize for the top student, a position he had maintained every year throughout the programme. After leaving UoN, he worked as a Plant Engineer at Unilever Kenya Limited, formerly East Africa Industries Ltd, where he obtained his first experiential training in engineering before proceeding for further studies in 1990. Read Full Profile

Prof. Peter Ng’ang’a Muchiri is currently serving as Deputy Vice Chancellor (Academic Affairs & Research). He attained his PhD in Mechanical engineering from Arenberg Doctoral College in University of Leuven in Belgium. Later, he did his Post-Doctoral studies in the same University. He holds a Masters Degree in Industrial Engineering & Management from University of Leuven, Belgium and a Bachelor of Science in Mechanical Engineering from Jomo Kenyatta University of Agriculture & Technology (JKUAT), Kenya. He is registered by the Engineers Board of Kenya (EBK) and is a member of Institutions of engineers of Kenya (IEK). Read More

Prof. Esther Nkirote Magiri is currently serving as Deputy Vice Chancellor (Administration and Finance). She attended Tel Aviv University, Israel for her postdoctoral studies, having graduated with a Ph.D degree in applied Molecular Biology in Plant Pathology from ZheJiang University, PR , China. Before this, she had graduated with MSC in Biochemistry and BSc. (Biochemistry major and Zoology minor) from University of Nairobi.  She is an associate member of Kenya Institute of Management (KIM). Read More

Jennifer W. Khamasi (Ph. D) is an Associate Professor of Family and Consumer Sciences Education and has specialized in curriculum and instruction. Before joining Dedan Kimathi University of Technology as the Registrar Academic Affairs, Prof. Khamasi served Moi University in various capacities. She helped set up the Institute for Gender Equity, Research and Development, IGERD (2005-2011) and was the first director. Previously she served as the Associate Dean, School of Education-Chepkoilel Campus (2002-2005) and Head of Family and Consumer Sciences Department (2003-2008). Read More

Dr. Paul Koigi Mbote is currently serving as the Acting Registrar Administration and Finance. He holds a PhD in Business Administration from DeKUT, Master’s Degree in Computer Based Information System (M.Sc. CBIS) from the University of Sunderland and Bachelor of Science (Mathematics and Computer) degree from Jomo Kenyatta University of Agriculture and Technology (JKUAT). Previously, he served as Deputy Registrar Corporate Planning and Strategy, DeKUT (2014-2018). He has also served as the Deputy Registrar Academic Affairs and Acting Registrar Academic Affairs (2011-2014). From March 2008 to December 2010, Dr. Mbote served as the Acting Registrar, on secondment from JKUAT, for a period of three years. Before joining KUCT, the predecessor of DeKUT, he worked as an administrator in JKUAT for a period of six years since December, 2001.