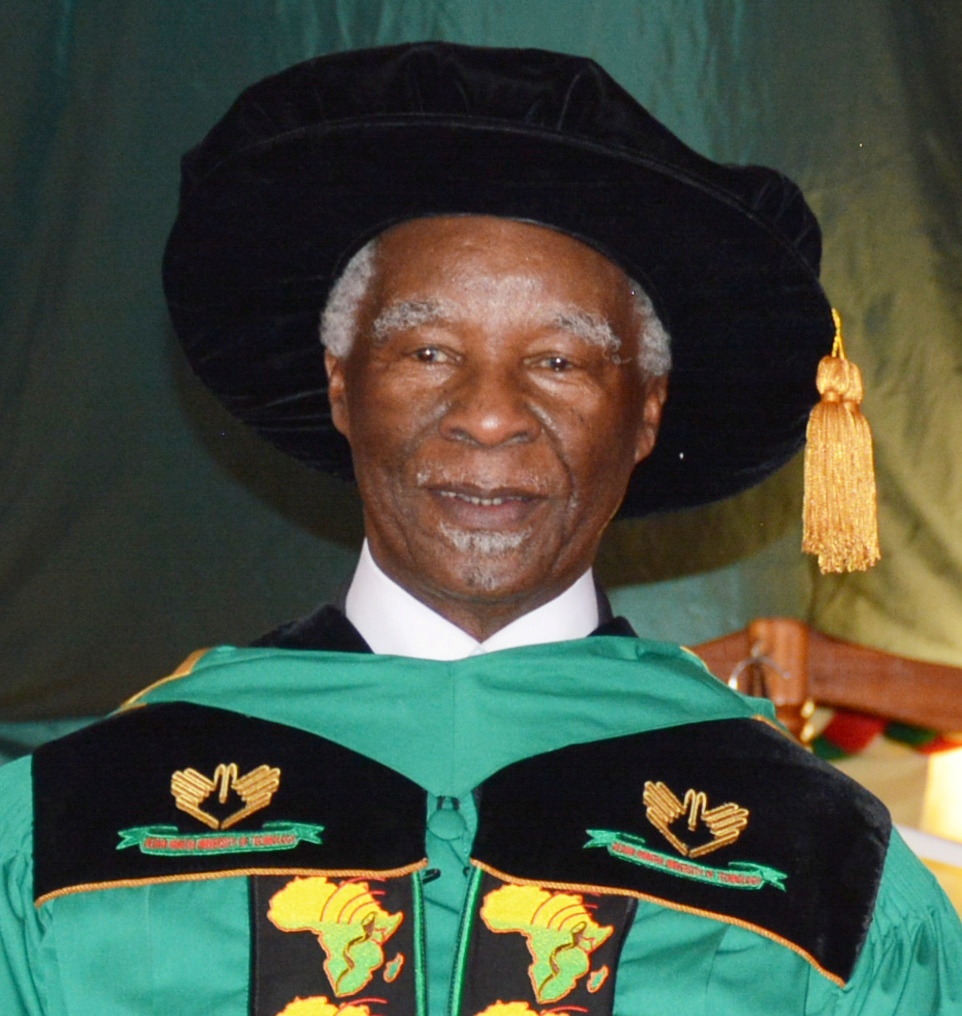 TO HIS EXCELLENCY THABO MVUYELWA MBEKI

On this Sixth Graduation Ceremony of Dedan Kimathi University of Technology, the Senate of the University, under the powers conferred by Article 20(3) (j) of Dedan Kimathi University of Technology Charter, and with the consent of the University Council, has determined that His Excellency Thabo Mbeki, the former President of the Republic of South Africa, be awarded the Doctor of Humane Letters, Litterarum Humanorum Doctore (honoris causa) of this University. It is a great honour to our University and to the current and future graduands that His Excellency has accepted this award.
The University Senate in making this award noted that His Excellency, throughout his life, has made many enormous contributions to humanity. The Senate specifically recognizes Thabo Mbeki’s early age political   consciousness  which led him, while still a teenager, to become politically active and to commit himself to pursuit of freedom and justice; and subsequently, his enormous contributions throughout his life to the liberation of the people of South Africa and establishment of a democratic and non-racial  South Africa; and, as a President of South Africa, his creative contribution to the Africa transformation and specifically his development and promotion of the  African Renaissance and the establishment of New Partnership for Africa’s Development (NEPAD).

Thabo Mbeki was born on 18th June, 1942 in Transkei, South Africa, to Govan Mbeki and Epainette Mbeki, who were both teachers. His father was also a leading figure in African National Congress (ANC). His early formal education was acquired at Ewing Primary school in his home area Mbewuleni and later at a senior school in Queenstown. Thereafter, he joined Lovedale College for Secondary education. He did his A-levels at Britzius College in Johannesburg following which he enrolled at the London School of Economics for a degree in Economics to be taken by correspondence. He completed his studies for the degree at the  University of Sussex in 1965. He stayed on at the University for a Master of Arts degree in Economics and Development.  He also received military training in Moscow in preparation for work and leadership in ANC.
His political consciousness was fully awakened in 1952 during the campaigns organized to defy the introduction of apartheid policies and the racial segregations which were being introduced all over South Africa. He made a determination to fullyparticipate in the campaigns by joining the ANC. He was only 10 years old. ANC considered him too young to join. He had to wait until 1956, when he was 14 years old and already at Lovedale to join the ANC Youth League. He was thereafter very active in politics.

Thabo Mbeki later joined the Lovedale School, just one year after the enactment of the Bantu Education Act. The Act’s main objective was the enforcement of racially discriminatory curriculum designed to deny black people the kind of education opportunities provided to white people. This turn of events, in the context of increased repression, all around South Africa led to a strike at Lovedale College in which Mbeki, now as the Secretary of the ANC Youth League Lovedale School Branch and a student leader, played a leading role. The school was shut down and some 300 students sent home. Mbeki and many of these students were never to return as they declined to sign the loyalty letters that were a condition for re-admission. He continued his education through correspondence.
While studying for his A-levels, Thabo Mbeki linked up with Nelson Mandela, Walter Sisulu, and other top and older ANC leaders with whom he became immersed in political work. He was tasked to start a new political group, the African Students Organization (ASO) to take over the functions of the ANC Youth league now that ANC had been banned. To this end, he travelled all over South Africa as the organizing secretary promoting the ANC’s objectives and recruiting members. In 1962, Mr. Mbeki was ordered by ANC top leadership to leave the country and pursue further studies at University of Sussex. This was a part of ANC’s strategy to continue its operations from abroad following ongoing systematic clampdown on its activities within South Africa.

1962 was a bad time for ANC as the top leaders, would be arrested, charged and subsequently found guilty of treason in the famous Rivonia trials.  Mbeki, who was now a student leader at University of Sussex  would use his platform to organize a march from Brighton to London which culminated in a demonstration outside the South African Embassy and the delivery of a petition, signed by 664 students, to the Prime Minister at 10 Downing Street. The global outcry arising from this and such other similar campaigns led the Rivonian group being sentenced to life in prison instead of execution.
For the next three decades, rallying support against the intransigent apartheid regime in different capitals of the world became a critical part of his work.

Thabo Mbeki distinguished himself in his ability and willingness to reach out to different people regardless of race and gender. While working in London for the movement’s Youth and Student Section, he persuaded the ANC’s top leadership to allow non-African South African students who were committed to the ideals of the ANC and willing to fight the apartheid regime for a democratic non-racial South Africa to join the movement. This was a radical and bold move at the time, for most people in ANC were apprehensive of inclusion of non-Africans. This inclusion actualized one of the tenets of the ANC Freedom Charter: “Peace and friendship amongst all our people shall be secured by upholding the equal rights, opportunities and status of all”.

While working in Swaziland and Botswana, he created pathways into the ANC for many members of the Black Consciousness Movement and led them into joining as members of ANC, instead of them operating as a different political entity. He demonstrated this same ability when posted, from 1977, to Nigeria and assigned the task of establishing diplomatic relationship with President Olusegun Obasanjo’s government.
From the early 1980s, Mbeki, as head of department of information and publicity led an ANC campaign to involve more white South Africans in anti-apartheid activities. By mid-1980s, significant groups of white South Africans had begun to imagine a non-racial and democratic South Africa and to consider reaching out to the ANC to discuss what form this would take. During visits to its headquarters in Zambia, they found the ANC well prepared for this from the policies of inclusion which it had adopted and put into practice years earlier. Mbeki was one of the key members of the ANC teams which met in Zambia and elsewhere from time to time with various delegations of white South Africans; his attitude, urbane character, and deep and thoughtful engagement in matters are considered to have been invaluable in reassuring and changing the perceptions about the ANC of many of these delegates. In 1989 he led the ANC delegation in the secret talks with the Nationalist government which discussed and agreed on the unbanning of ANC and release of political prisoners. He was appointed one of the deputy presidents of the grand-coalition government established in 1994 after the multiracial elections.

Even as Thabo Mbeki applied his energies to the work of creating a new South Africa; he also applied his mind to envision the future of the rest of Africa. - the Africa that had welcomed and hosted him and fellow compatriots; the Africa whose post-colonial governments and societies faced new challenges of underdevelopment, divisions arising from ethnicity and non-democratic governments, and deferment of many dreams held at their independence.

Furthermore, now that the fight against colonization was being concluded, leaders in Africa could steward the continent on a new agenda to build an even better and prosperous Africa.
Later, in a speech in April 1997, Thabo Mbeki talked of an African Renaissance when he stated:
“Those who have eyes to see, let them see. The African Renaissance is upon us. As we peer through the looking glass darkly, this may not be obvious. But it is upon us”.
He envisioned a Renaissance where the African peoples are empowered to deliver themselves from “the legacy of colonialism and neo–colonialism and situate themselves on the global stage as equal and respected contributors to, as well as beneficiaries of human civilization”.
In his now famous speech “I am An African”, delivered at Constitutional Assembly meeting in South Africa in 1994, the theme of self-definition and self-determination runs through. It brings to the fore the historical foundations of African society; the contributions over the centuries to what we are today, by black people of different sub-nations through their sufferings and heroic deeds, that of influences by peoples of other races coming to Africa under varying circumstances, some from Europe in search of fortune, adventure, or on some other ideological or religious missions, others from Asia seeking a better life or brought for their labour. It teaches us the strength of inclusivity and richness of diversity of the African cultures, and the power of partnership.

African Renaissance got expression through a number of continental initiatives in which Thabo Mbeki played invaluable roles.
At an OAU summit held in September 1999 in Libya, Presidents Thabo Mbeki, Olusegun Obasanjoand AbdelazizBouteflika were mandated to engage creditors for the total cancellation of Africa’s external debts. This became the beginning of the development of a common African recovery programme, developed for Africa by Africans. This effort was subsequently merged with a parallel one led by President AbdoulayeWalde of Senegal, and eventually became the New Partnership for Africa’s Development (NEPAD) in October 2001. The NEPAD is essentially a pledge by African leaders ‘to eradicate poverty and to place their countries, both individually and collectively, on a path of sustainable growth and development, and at the same time to participate actively in the world economy and body politic’.
Among the many outcomes of NEPAD is the African Peer Review Mechanism (APRM) from which many countries, including Kenya, have benefited. As a result of this APRM, Kenya embarked on a second peer review in 2016 after the first of 2006. President Uhuru Kenyatta, who is the current chairman of the APRM forum of Heads of State and Government participating in the process, hailed the mechanism as a good tool for review of African countries, as it is carried out by people having similar backgrounds and challenges.
Thus, the unfolding of the African renaissance continues.

Mr. Chancellor Sir, Thabo Mbeki’s vision, ideas, life-time engagements, actions and outcomes are attributes which Dedan Kimathi University of Technology strongly identifies with in pursuit of her mission to bring about improvement of the society.
Dedan Kimathi University of Technology was founded as a community initiative, to create opportunities for young people which borrows heavily from Thabo Mbeki’s dreams and aspirations. It was a creative educational initiative which recognized that the appropriate weapon for the war to create a prosperous society would now be science and technology. The entire effort, which involved people from all walks of life, was reminiscent of the spirit which guided them to wage the war of independence, against Britain colonialism. Thus, the institution is aptly named after the freedom fighter Dedan Kimathi Wachiuri, and serves as a living commemorative monument to this phase of Kenya's history.
The African National Congress (ANC)’s creation of Umkhonto we Siswe, “Spear of the nation” and hence taking up of arms in the struggle, in June 1961, embodied the spirit of the Kenya's liberation war. This was a key and bold change in people's and leaders' mindset on the approach to confronting seemingly insurmountable societal challenges; it was a renaissance-like leap.

The very conferment of this degree to President Mbeki provides a unique and historic bond across Africa that cements a shared past and a spirit of a common foundation for a better and prosperous Africa.

Mr. Chancellor Sir, it is my great honour and privilege to present to you and this congregation His Excellency President Thabo Mbeki for the conferment of Doctor of Humane Letters, honoris causa.