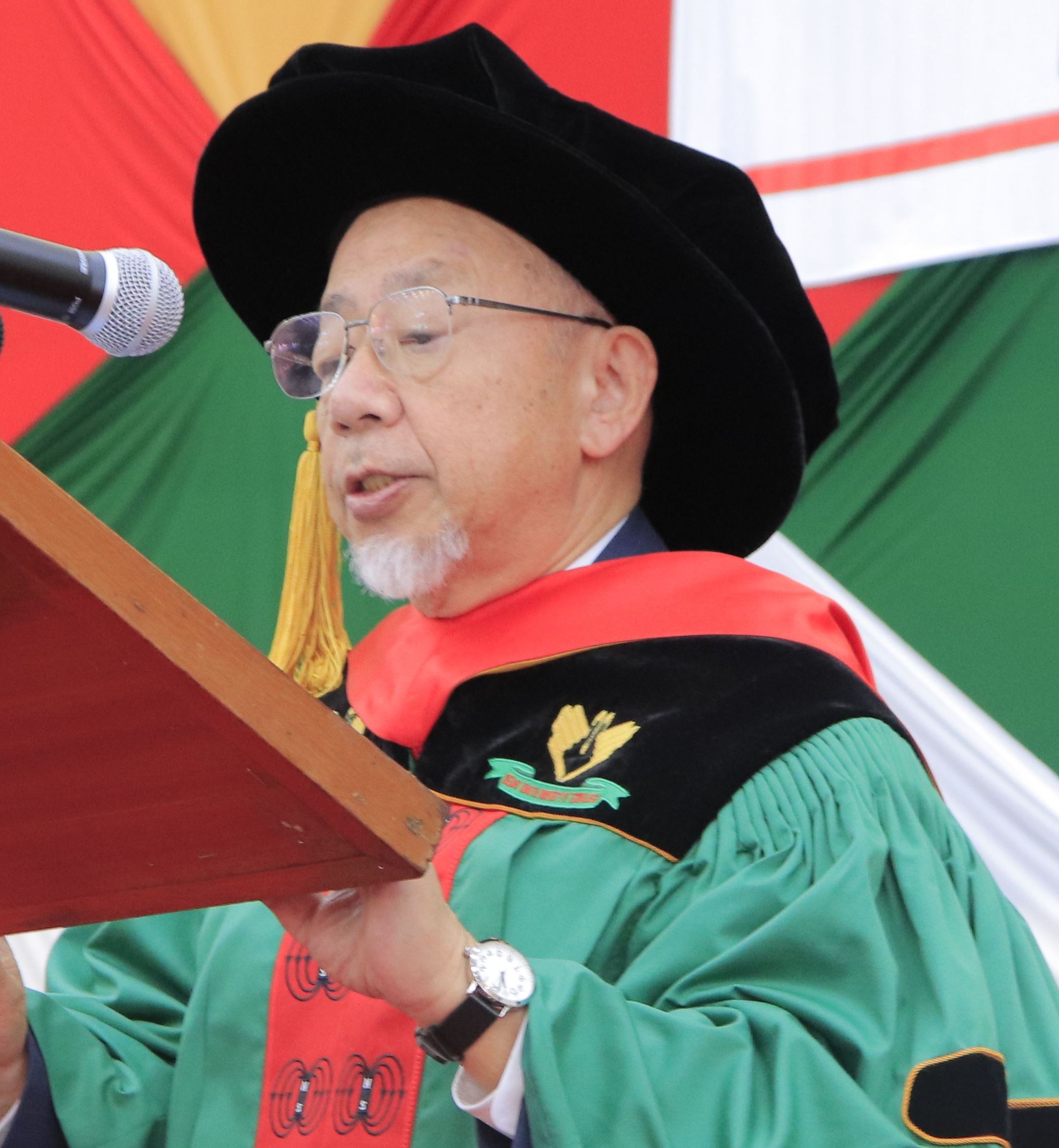 Prof. Saito was born on 20th September, 1944 in Sawara-ku, Furukoka City in Japan. He obtained Bachelor’s, Master’s and Doctorate degrees in Engineering from Kyusu University in Japan. He has been a Professor for a period of 35 years. He started working as a research associate back in 1974 at Faculty of Engineering, Tottori University. He later served as University President, Fukuoka Jo-Gakuin University from 2001-2005.

Prof. Saito started coming to Kenya in early 1980’s at the very initial stages of establishment of Jomo Kenyatta College of Agriculture and Technology (JKCAT). He was appointed by Japan International Cooperation Agency (JICA) to be one of her professors working in Japan but providing advisory role to JKCAT. He continued providing that role to JKCAT when it was elevated to a constituent college of Kenyatta University, and later as a full-fledged University – Jomo Kenyatta University of Agriculture and Technology (JKUAT). This was from year 1984 to year 2000.

Prof. Saito had a special role of enabling the students trained in Kenyan institutions to join Japanese universities. When JICA came to Kenya, it had to map the Kenyan education system against the Japanese one in order to establish how persons trained in Kenya’s middle level colleges could continue with their education in Japan. JICA appointed Prof. Saito to undertake a study, write a report and recommend how that could be achieved.  This study took him to the United Kingdom, to study their education system which had middle level colleges similar to Kenya, and a fully developed university system. He spent a lot of time in the U.K. institutions doing this research.Thereafter he extended his study to Kenyan education system and immersed himself into the system, and particularly by taking a teaching role at JKCAT.He aimed at getting a thorough understanding of the Kenyan education system and students.

After the study, Prof. Saito wrote a report recommending development of a bridging system for higher diploma students educated in Kenya to continue with master’s degree programs in Japan. Both JICA and Japanese education system accepted and adopted the recommendations, and on this basis, Kenyan students and tutors were able to benefit from further education in Japan. This opened a route for degree students from Kenya. Today, DeKUT’sgraduates and staff are ableto continue with their education in Japan.

His work enabled the creation of an officially recognized framework for Kenyans to pursue further studies in Japan. Building on this framework, degree graduates from Kenyan Universities would subsequently be admitted into Masters and PhD programmes.

Prof. Saito worked hard to promote a cultural understanding between the Kenyan and Japanese people. To achieve this, he became the Kenyan cultural ambassador in Tottori Prefecture; Japan has 47 prefectures that are equivalent to Kenya’s 47 counties. During social cultural events in Tottori, he made efforts to ensure that Kenya was well represented: He had a rich collection of Kenyan cultural artifacts, regalia, traditional head gears, dresses, musical instruments, among others – which he exhibited to Japanese.Prof. Saito took upon himself theresponsibility of ensuring that Kenyan students entrusted to him were able to fit into the social and cultural settings in Japan. He would embrace the Kenyans and their diverse cultures. He even encouraged Japanese to come to Kenya to learn our culture and socio-economic settings.

Beyond his core duty under JICA, Prof. Saito engaged in other intercultural activities and always looked out for opportunities to promote intercultural exchanges. He achieved this through organizing seminars and conferences, where Kenyans and Japanese interacted.

After the expiry of the JICA Cooperation project, Prof. Saito continued to make regular visits to Kenya and to encourage his Japanese friends to visit and participate in various activities in Kenya. He also supported the establishment of the Matumaini Children’s Home, in OngataRongai (Nairobi) and made arrangements for many young Japanese to spend time with the children at the Matumaini Children’s Home.

While serving in the academic world, Prof. Saito has been actively involved in local communities. He joined the Young Men Christian Association (YMCA), and once served as President of the Fukuoka YMCA and as President of Hakozaki Freedom School Esperanza.

Prof. Saito has been a member of professional societies both in Japan and internationally and his notable contributions to the research world extended to our country. He is one of the founding membersof the Kenya Society of Electrical and Electronic Engineers (KSEEE). Started in the year 1991, KSEEE together with the Japanese Society of Applied Electromagnetic and Mechanics (JSAEM) provided a platform where Engineers and Scientists in the wider electromechanical field working in the universities and in the industries,would exchange ideas by holding annual conferences.The success of the KSEEE is primarily attributable to Prof. Saito for mobilizing funds amongst his peer professors, overseeing the development of ‘Call for Papers’ and bringing many participants from Japan to attend the Kenyan conferences. He became the patron of KSEEE.

He also went out of his way and played a pivotal role, in partnership with Japanese and Kenyan colleagues, in organizing international conferences in Electrical and Electronics Engineering in Kenya. It is through these conferences that he made it possible for young scholars to make their research work known in the Electrical Engineering sector.

Prof. Saito has been actively involved in the mission of the Dedan Kimathi University of Technology: He was very active in the curriculum development of the undergraduate programs in the School of Engineering and has worked as a visiting Professor in the Electrical and Electronic Engineering department, and mentoring young academic staff.He identified and helped DeKUT to recruit Japanese professors to serve as visiting professors. It is through his efforts that DeKUT established a partnership with the Gifu University where a number of DeKUT’s staff members have been trained at the PhD levels.

The Senate has recognized that Prof. Saito assisted many Kenyan students to train in Japanese and other international universities, supported establishment of a stable Engineering department in DeKUT, and enabled cultural exchange between Kenyans and Japanese.

The conferment of this degree appreciates the ground-breaking career and service as a cultural ambassador, a professor, scholar, and for his academic excellence in the field of Electrical Engineering.

Mr. Chancellor Sir, it is my great honour and privilege to present to you and this congregation Prof. Akihiko Saito for the conferment of Doctor of Engineering,honoris causa: Prof. Akihito Saito.