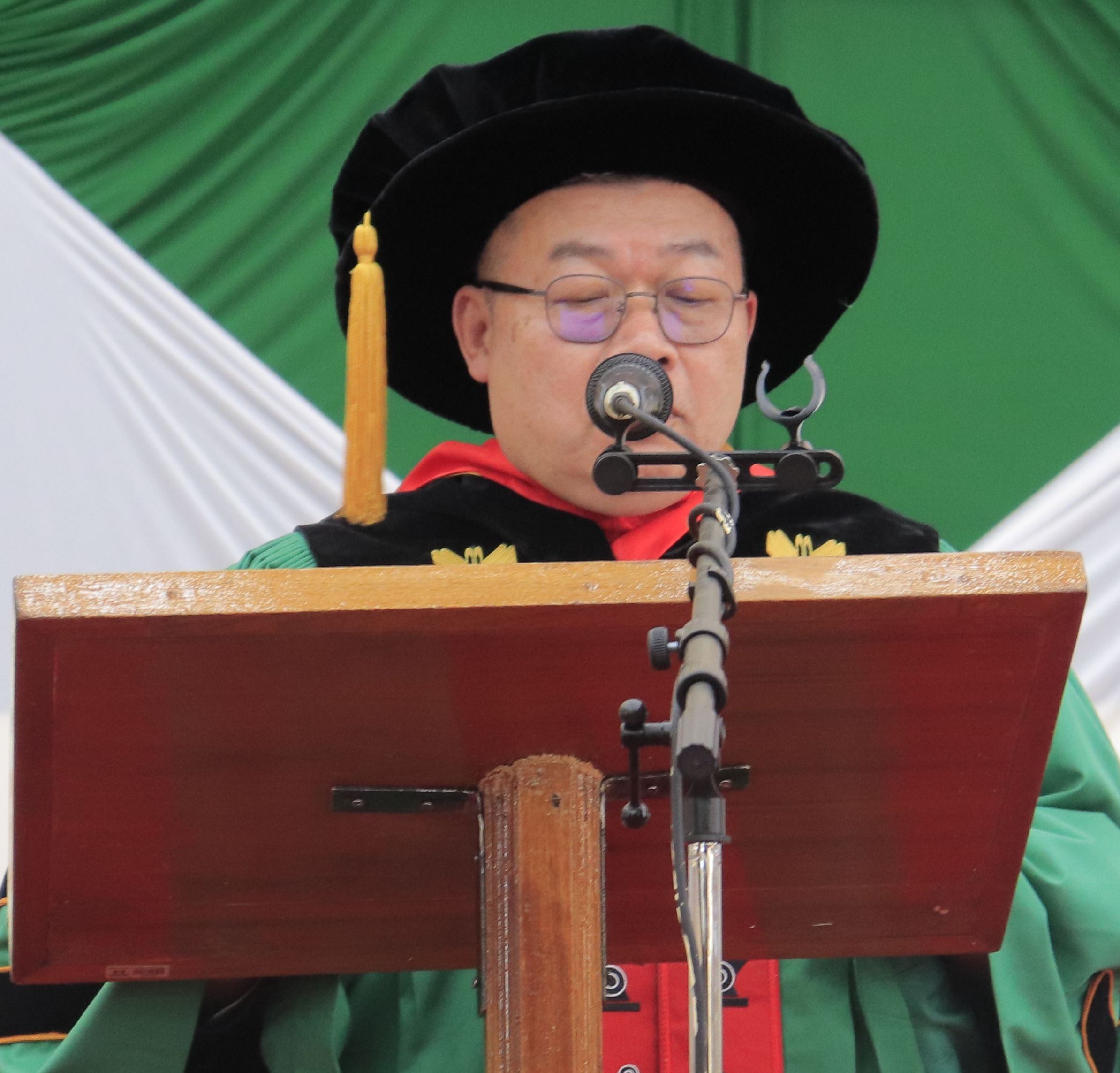 On this  Eighth  Graduation  Ceremony  of  Dedan  Kimathi University  of  Technology,  the Senate  of  the  University,  under  the  powers  conferred  by  Article  20(3)  (j)  of  Dedan Kimathi  University  of  Technology  Charter,  and  with  the  consent  of  the  University Council,  has  determined  that  Prof. Minoru Sasaki, be  awarded  the  Doctor  of  Engineering,honoris  causa (D. Eng. h.c.) of  this  University.  Prof. Sasaki has accepted this award. The  University  Senate, in  making  this  award, noted  that  Prof. Sasaki,  throughout  his life,  has  made  many  enormous  contributions  to  humanity through research and outreach activities.

Prof. Sasaki was born in 1956 at Sendai in Japan. He obtained his Bachelor’s degree in Mechanical Engineering from Yamagata University in 1980, a Master’s in 1982 and a PhD in 1985 from Tohoku University. He joined academia as a research associate at Tohoku Universityin 1985 and quickly went up the ranks to become a full professor of Gifu University in 2003. In the course of his career, Prof. Sasakihas served as a visiting professor in Universities outside Japan; including University of California Los Angeles (UCLA) -USA, University of Dar-El-Salaam, Brunei, in South East Asia, at Pan African University of Science and Technology and Innovation, (PAUSTI) and Dedan Kimathi University of Technology in Africa.  He has extensive research partnerships with many scholars from around the world.

Prof. Sasaki has made outstanding contributions as a researcher in the field of Applied Mechanics and Electromagnetics. His contributions have applications in industrial automation, robotics, vibration control, sound control and bioengineering.These are the areas which are broadly referred to as Mechatronic Engineering.  The breadth and scope of his research work reflected in his many publications. He has over 250 scientific publications and has supervised 12 PhD students. His research work has attracted over 34 significant research grants to date totaling over JY 759 Million, equivalent to KES. 690 Million.  Kenyan students have benefitted from some of these grants through support for travel and research in Japan. His deep involvement in these research areas is illustrated by the many scientific associations he is affiliated to. He is a member of the American Society of Mechanical Engineers, Japanese Society of Mechanical Engineers, Society of Instruments and Control Engineers, Robotics Society of Japan, Japanese Society of Aeronautical and Space Sciences, Japanese Society of Applied Electromagnetics and Mechanics, and the Planetary Society.His research publications have received many honours and awards in Japan and abroad including being voted the best professor in Gifu University in 2016.

An admirable attribute of Prof. Sasaki is the length to which he goes to build research partnerships and to mentor young scholars into becoming researchers. Over the course of his career, he has developed an extensive network of both individual and institutional partnerships. Of importance also, is the commitment he has to extending these partnerships to Kenya.

Both Prof. Sasaki and Prof. Saito are the founding members of the Kenya Society of Electrical and Electronic Engineers (KSEEE) that started in the year 1991. KSEEE was started as a platform where Engineers and Scientists in the wider electromechanical field working in the universities and in the industries can exchange and disseminate ideas by holding annual conferences.They provided a crucial link between KSEEE and the Japanese Society of Applied Mechanics and Electromagnetics (JSAEM). To this end, Prof. Sasaki has actively promoted participation of Kenyans and Kenyan institutions in the networks that he has helped cultivateacross Asia.

He has nurtured partnerships between Dedan Kimathi University of Technology (DeKUT) and Gifu University. Through Gifu, DeKUT is linked to important partnerships and our students are able to participate in specialized programmes such as theAdvanced Global Program (AGP) in the Master's course of the Graduate School of Natural Science and Technology, Gifu University. Furthermore, the DeKUT- Gifu partnership has given opportunities for half a dozen staff to pursue Doctor of Philosophy degrees at Gifu by the time of this conferment.Additionally, he has facilitated and guided DeKUT staff members in applying for full scholarships and played key roles in the implementation of the Collaboration between DeKUT and Gifu University, signed in 2015.

Prof. Sasaki has a keen interest in promoting Engineering education in Kenya and building partnerships between Kenyan and Japanese scholars.The University recognizes the numerous visits he has made to Kenya to participate in conferences and to give lectures and deliver courses to postgraduate students. The linkages to DeKUT, Pan African University of Science,Technology and Innovation, and JKUAT, have been critical to the development of the Institutions.

Prof. Sasaki has contributed to DeKUT as a visiting professor and a thematic leader in the School of Engineering. He has mentored many of the young staff in the Mechanical, Mechatronics and Electrical and Electronics Engineering. Whenever he visits Kenya, he takes time to advise the research students and to also give lectures on research and the cutting-edge technology.  He has also played important roles in the development of academic programmes; particularly Bio-Medical Engineering, where he and his colleagues are doing some pioneering research in Japan. Prof. Sasaki’s work in introducing Gifu Professors to DeKUT and encouraging them to have research partnerships with DeKUT faculty has been critical in the growth of the University. DeKUT also recognizes that his partnership with Prof. Akihiko Saito, formerly of Tottori University which began many years ago, has been pivotal in building the University linkage between Kenya and Japan.