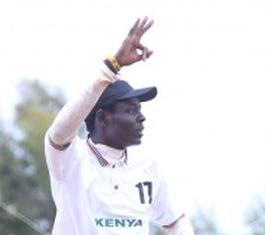 "I started playing softball with my friends as a hobby at Dedan Kimathi University of Technology (DeKUT) shortly after joining in 2013. After long lectures, we would go swing the one bat we had and some tennis balls just to unwind and have fun next to the University’s bus park. I gained more and more interest in the game and started watching videos of the sport online. When I came across some equipment in Gikomba market, I bought them, carried the kit to my campus and curious students would join me daily for practice until the University’s sports department heard of us, from a physical education intern who knew the sport, and gave us an official training field. The Kenyan Little League and Softball Kenya donated starter kits in 2016 and in the same year, we joined the National Softball Series and finished at position three hence qualifying for the playoffs. This motivated the young team to train harder and this team that now had the name Nyeri Rebels became the new school's sensation; everyone wanted to be part of us. It’s been a journey that started as a hobby and now I have played professionally for several teams and I have been recently recruited to play for the National Softball Team; we will represent Kenya next year in South Africa for the Softball World Cup Qualifiers.” –Kahugu Benson Munge

T Alan Armstrong, an American writer, said this: "Find your passion, whatever it may be. Become it and let it become you and you will find great things happen for you, to you and because of you." The story of Kahugu and how he ended up being a Professional Softball Player, now in the Kenyan National Team, is one of a person who put himself out there in a very subtle way but allowed himself to find passion in a sport. Having joined DeKUT to pursue a B. Sc. in Telecommunication and Information Engineering; an area he had interest in from an early age, this young man who describes himself during his University days as a nerdy geek and jock took advantage of his time at the University to do more than just class work; he found a hobby which he has now transformed to a career in addition to running his business.

After graduating in 2018, Kahugu worked at icolo.io (a company that designs, builds and operates state of the art carrier neutral data centers to serve a broad spectrum of clients) as a junior site engineer in 2019 in Mombasa and in 2020, he moved to KPLC Ruaraka as a Radio, Fiber, Power Systems and Communications Trainee. He later started his own business going by the name Kifaru Communications Limited where he is the Managing Director (MD). His business deals with selling and installation of communication devices, fleet management and security equipment to clients across Kenya. Kahugu has been juggling between his profession in the field of telecommunication engineering and that of being a professional softball player and so far, besides playing for the club he founded (Nyeri Rebels), he has played for several other clubs leading to his selection into the Kenya National Softball Team. He has also played for Kenya in Baseball Olympics qualifiers and is a world accredited coach through the World Baseball Softball Confederation (WBSC) coaching program, 2018. Last year, Kahugu was appointed as the Club Manager of Vifaru Baseball Club.

In case you’re wondering what inspires Kahugu, he says that he just loves trying out new things and visualizing things beyond the short term; he calls himself a dreamer. He dreamt (still dreams) of a world where he could be free and doing something he loves and enjoys doing. He found this in sports (softball & baseball in particular) and he used the sport to work on himself and to overcome so many personal shortcomings such as social anxiety and being physically unfit. Some of what he considers his greatest achievements so far are: beating clinical anxiety that helped him in a big way to complete his studies, making it into two national teams and as a Vifaru Baseball Club Manager, he considers winning back to back titles for the Baseball for Africa championship 2019 -2021 a great achievement. Kahugu is proudly a player who has played for the most clubs in Kenya to date in the National Softball League; these clubs include Nyeri Rebels, Stormers, Crusaders, Lake's Diamonds and the Titans. Gaining leadership skills as a result of being a captain and club manager as well as mastering discipline to juggle his academics, sports, business and his social life also count as great achievements. 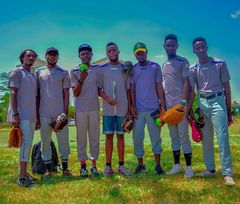 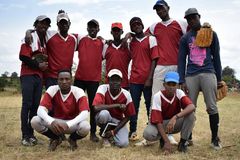 Kahugu is interested in starting a Softball Academy in Nyeri towards bringing more young people into the sport and nurturing them to be professional players. He is currently coaching locally in Kiambu as he expands his network and makes his plan more elaborate. He can’t wait to come back to Nyeri, where his journey as a Professional Softball Player began, with the right partners to launch his academy.

As our philosophy emphasizes, Kahugu is living proof that self-actualization, and solutions to global challenges are attainable through a spirit of dedication, self–confidence, determination and best utilization of resources. We are utterly proud of him and wish him the very best.