SHE DIVED INTO THE JOB MARKET WHILE IN THIRD YEAR.

“An article in the newspaper was addressing a shortage of Geomatic Engineers in KenGen. Upon looking into the course, only Dedan Kimathi University of Technology (DeKUT) was offering it so I took it. Gladly, at the end of the 5 year course, I could confidently tell what it entails and I found my niche; and maybe, I will still get a chance to work at KenGen to fill that gap. I loved my experience studying at DeKUT; it was great - a special shout out to the Institute of Geomatics, GIS and Remote Sensing (IGGReS). Their engagement and resources; from the lecturers to the administrative staff, were impactful. The University’s Innovation Hub (DeHUB) too played an integral role towards where I am today and the drive I have for the future. The DeKUT Tech Communities are some of the avenues that turned out to be great resources that propelled my career. Speaking of career, my transition to the job market was smooth. I dived into the market while in third year so the culture shock was not really bad. I had great mentors who are alumni of DeKUT and they held my hand in curving a path of my own; Ms. Stella Chelangat and Mr. Eddy Mburu, just to mention a few. I am so grateful to them.” - Maria Njoroge.

Maria recently graduated (in May 2022) from DeKUT with a Bachelor of Science Degree in Geomatic & Geospatial Information Systems and having been involved in engagements and initiatives that helped her build a career path while at the University, she hit the ground running. She is currently running a startup that she co - founded when she was a third year student; the Plant Signal while at the same time, running a survey firm that she recently established.

Plant Signal was born on a night of Microsoft Hack in the year 2019 by a well crafted team of 4 students in DeKUT. The team consisted of Shadrack Kiprotich, Aaron Kipkoech, Delivice Mwangi and Maria Njoroge; Maria was in her third year of study then. The team later went through a series of training, bootcamps and finally, they established Plant Signal as a fully operational StartUp in 2020. In brief, Plant Signal is a mobile platform that leverages Artificial Intelligence to give accurate results on pests and diseases on crops while guiding farmers on their farming season to maximize on production.

Maria is inspired to see more women live a sustainable livelihood and communities getting better every day. As Plant Signal addresses food production and given that land and farming  are intertwined, she feels that if more women own land legally and delve into farming for family sustenance then the community will be fed, livelihoods will improve and there will be healthier communities and an improved economy. This is what gave birth to the idea of starting a survey firm, alongside the startup, where she mainly focuses on seeing more women own land. Her interests are in smart agriculture and survey. In her words, “I found a niche where we do legalization of land documents and also advise clients into smart agritech solutions for the same. I am looking forward to offering drone services in the future, and more so, to enable more women in marginalized areas to own land.” Maria considers her greatest milestones and achievements thus far to be graduating with a Second Class Honors - Upper Division, establishing a firm and co - founding and running a startup. 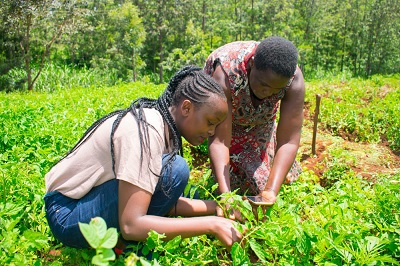 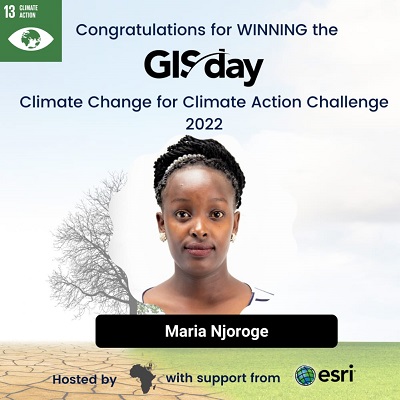 Recently, there was a GIS challenge that was organized by African Surveyor Connect with an aim to come up with solutions on the Climate Change crisis. It was a 2 months hackathon that culminated on the GIS day; 18th November, 2022. There were 4 categories; Plant Signal fell on the geo-enabled track apps. Plant Signal qualified for this challenge as it advises farmers on use of organic materials on their farms hence reducing use of chemical fertilizers. The app also connects farmers with suppliers of the organic materials in case one doesn't have one. Maria and her team emerged as the overall winner and got a chance to showcase at the final summit of African Surveyors Summit in Arusha Tanzania.

Asked if DeKUT prepared her for the world, Maria says that it sure did as her network grew from the many events she attended while at the University; that were made possible by the University and her studies prepared her professionally. As a parting shot, she says that DeKUT is a world class University with a lot of potential for this country and beyond.